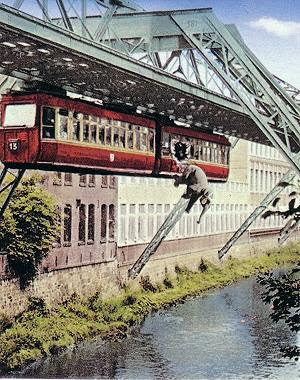 Remember the clown in the movie Dumbo who said something to the effect of, “Elephants don’t have feelings. They’re made of rubber!” This is the story of Tuffi, the elephant pictured at the left. There are plenty more pictures at this site. The text is in German, but I have provided an extremely garbled Babelfish translation here.

Once a circus came to Wuppertal, which, as usual, unloaded cars and animals at the station. The animals, also the elephants, should pull to the circus place, whereby Wuppertal was, it 21 June 1950, looked still very unwegig. Which took named Tuffi the desire to the young elephant, over such rubble mountains to trotten. There the elephant nevertheless rather went to the suspension railway station, bought a ticket and ward, one took interests portion, in the cars calmly.

Now swings however did not please suspension railways, which Tuffi, then reported. Thus it broke through the door of the car and jumped into the Wupper. He did not know, it up to the next stop was as far - it would have been eagle bridge.

Since there was however 1950 regrettably neither television nor CNN, one could see whole the naturally not live and no photographer pressed on the trip. Thus again once the Lithografen had to lie ran, those those, white one, could best bildnerisch. Commodity the hole really of Tuffi, now, then would have he not only a beautiful hole in all peace into the trailer torn, but also still well a meter to high-jump to have, in order to come by the hole. In addition: flying elephants do not walk by air and the ohrenklappen hang downward, it are, the wind push up them again.

But like humans like that are, they do not goennen an elephant even the bath in the Wupper and drove them in such a way it, in hat and coat, understand themselves, again on the road back. Where it had to then draw the remainder of the way as last and smallest in the row trunks on tail of the way. And debt at everything was a zirkusdirektor oldhopes, who had not sent its elephant into the elephant suspension railway school. Which punishment the elephant got, is not well-known, because it crushed seat with its back still another, gehauen a camera zerschmettert and two reporters with the trunk one into the lip. Pfui.