The Language of Coffee 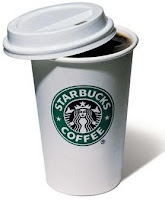 I posted a link to the Starbucks Oracle at Neatorama. It’s a silly generator that tells you your personality according to what you order at Starbucks. The comments were active. Someone asked why Starbucks is demonized. I can’t really answer that, as I don’t go to Starbucks. There isn’t one anywhere near where where I live. One person answered about how Starbucks pushed out local coffeeshops. Another said they corrupted the language of coffee. The language of coffee?

Then I found a post at the Consumerist, Order A Starbucks Tazo Chai Latte For Half Price.

I simply ask for a chai tea misto, with two bags so it's nice and strong, and half cinnamon and half vanilla syrup, with lots of foam. I sprinkle a bit of cinnamon, nutmeg and vanilla on the foam and BAM! I've halved my drink allowance for the week, but not lost any of the flavour.


Alrighty then. I know that “chai” is an Indian word for “tea” (in America, its usually short for “masala chai”, which mean “spicy tea”), and “latte” is French for “got milk?” but I have no clue what "tazo" or "misto" is. Yep, its a whole ‘nother language. There is a fancy-schmancy coffee shop in my little town (not a chain), but they are OK with me going in and ordering a “large coffee.” Especially since my kids order Jones Soda and chai.
Posted by Miss Cellania at 8/09/2007 09:20:00 AM