The KKK vs. the Clowns 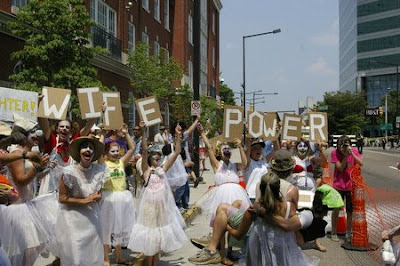 A KKK rally in Knoxville turned into a comedy as the 100th ARA (Anti Racist Action) clown posse joined in to compete for the silliest spectacle of the day.

“White Power!” the Nazi’s angrily shouted once more, “White flowers?” the clowns cheers and threw white flowers in the air and danced about merrily.

“White Power!” the Nazi’s tried once again in a doomed and somewhat funny attempt to clarify their message, “ohhhhhh!” the clowns yelled “Tight Shower!” and held a solar shower in the air and all tried to crowd under to get clean as per the Klan’s directions.

At this point several of the Nazi’s and Klan members began clutching their hearts as if they were about to have a heart attack. Their beady eyes bulged, and the veins in their tiny narrow foreheads beat in rage. One last time they screamed “White Power!”

I love those people.
Fight stupidity with comedy.
I would give them the Nobel Peace Prize for the most creative way to combat ignorance...
aside from mandatory sterilization.