April was riding down I-75 last weekend, thinking about all the traffic heading to Bristol National Speedway for the NASCAR races. It was quite a party, from what I've heard. Anyway, she saw a schoolbus. Nothing unusual, but then she noticed that the back of the bus didn't say "school", it said "chool". What? She took a picture to make sure what she saw was what she thought she saw. 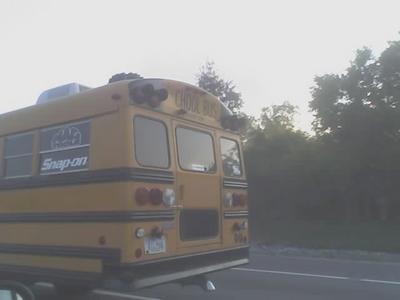 As her car got closer, she noticed this really was NOT a normal schoolbus. 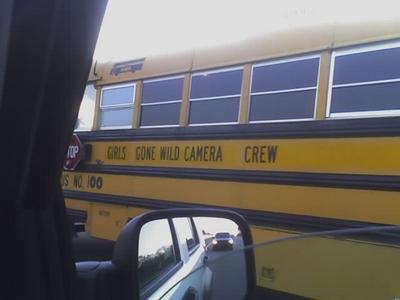 As they got closer, yes, she did she what she thought she saw. But she took a picture because otherwise, no one would believe her. 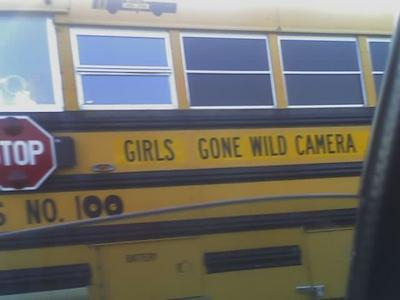 Girls Gone Wild Camera Crew. Note the bus number. As April's car passed the bus, faces appeared in the windows. The guys inside gave her thumbs up and gestured for her to flash them. LOL! This was not, of course, the crew that goes to college parties and produces videotapes to sell on late night TV. We figure it was a group of fellows who put their imaginations into maximizing their resources (an old schoolbus) to further their ultimate goal of seeing as many boobs as they can.

I can see it now. Dude! Lets take the breastmobile to Bristol this weekend! There's LOTS of babes with boobs at a NASCAR race!

You can imagine they probably had some luck in their quest. SOME of the women who would expose themselves might be sorely dissapointed to find they will NOT be unpaid talent for the lucrative "Girls Gone Wild" video series. Their parents would be relieved.

While we're talking buses, read a story about an eco-friendly school bus conversion. If you happen to have an old bus, here's how to convert it to an RV. If you thought I would give a link to Girls Gone Wild, sorry, you can find that on your own.

I am embarrassed to say that I am hungry right now.

Funny how often I have that effect on men.

Um anyway, thanks for your comment at my blog -- http://lifeduringwar.blogspot.com

But I'm dying to know, how did you find it so quickly? I'd just posted that piece minutes earlier.

How about a link exchange?

Also, you have a formatting issue that is affecting the columns of the blog. I know how to fix it.