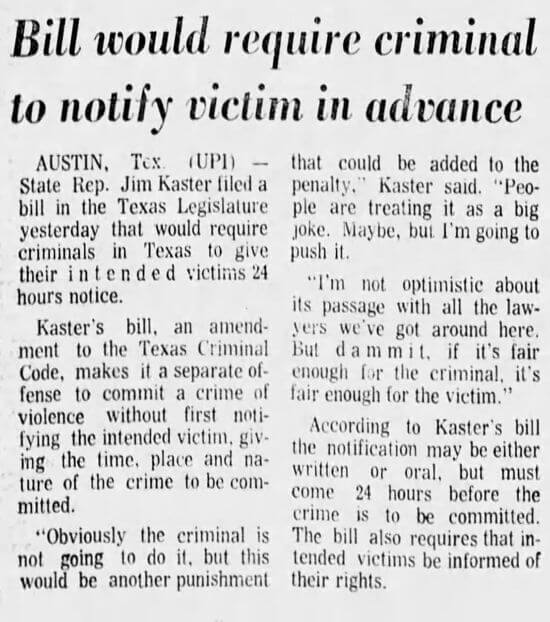 This is why most people detest politicians.  Instead of working on something that will actually benefit someone or protect someone, they come up with something like this which will likely go nowhere but will still take up a certain amount of time for the introduction, the reading, and the referral to whatever committee deals with this sort of garbage — time that could have been better spent doing just about anything else.

A law that won't be obeyed is a bad law. Moron.

Our prisons are full of people who disobeyed some law or other--so all laws are bad?

Because it breaks a principle similar to double jeopardy.

Well, because that would clearly be moronic, and clearly unjust. So the time to stop it is with the first fatuous law in the cycle, which is Kaster's.

But the laws /prior/ to this one - don't steal, don't murder, are fine, and don't need to be meddled with. And if there are problems with any of them, you fix those particular laws, you don't add another layer of jeopardy (and complexity) on top. Well, at least, that's what happens in states and countries that have a clue.


BTW another type of bad law is a law that won't be enforced, and for great injustice!, have laws that are selectively enforced.