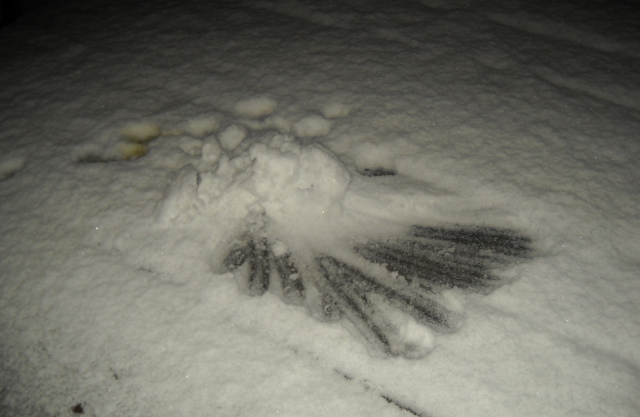 My town got the first substantial snowfall of the year, and it's still snowing. Tommy wanted to go out at 5AM, as he does, so I opened the door. He made it about two feet onto the deck, then peed and came back in. I never saw him pee on the deck before, but there usually isn't a supply of dusty stuff to cover it up with. I'm glad I got a picture, because the whole scene is covered up with snow now. So it's as good a time as any to give an update on the cats. 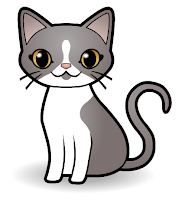 Frisby is almost a year old now (she was born around the Ides of March), but she's still small. She might always be small -recall that it took her forever to reach two pounds. She has a bit of a pot belly now, which I hope will change when the weather is warm enough to play outside. She has no idea about the snow, and has no desire to go out in the cold. If she does, I will be ready with a camera. Frisby still sleeps with me, but when Tommy started staying inside at night she had some competition. Tommy wants to be close to me, so Frisby started sleeping on top of my body somewhere. 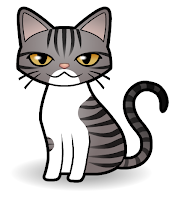 Tommy turns five this year. He's still the toughest street cat of the bunch, and only comes inside to eat during warm weather. This winter, he has staked out a box in my office for daytime napping, and when I'm in bed, he wants to be where my hand is. If my hand isn't resting on his body, he will sit on my hand. However, when my daughters are home, he will sleep upstairs with them (otherwise, the upstairs heat is turned off). In cold weather, he still spends more time outside than the rest of the cats. I never realized how much brown Tommy has mixed in with his gray fur until I got Frisby. Frisby is pure gray. 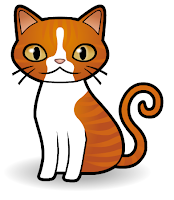 Apollo is the best communicator of the clowder. When he wants out, he will come to me and tap my leg. When he wants in, he has learned to come to the front of the house and scratch on the screen of my office window. Or meow. He is the most vocal cat, but he has this high voice that seems strange to other people coming from a huge ginger tom, probably because he was neutered as a kitten at the shelter. He sleeps at the foot of my bed, where he can keep an eye on things and not be bothered much. 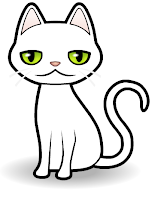 Marshmallow is the only cat who doesn't spend much time on my bed -she must think it is too crowded, because she has sometimes napped there only when no other cats are around. She gave up Fancy Feast for a long time. She was letting Frisby have her share, but then I quit dividing it like that. Lately, Marsh is showing signs of interest in gooshy food again, which tells me that she has judged Frisby to be a grown cat now, and no longer in need of her sacrifice. Some time ago, a thermal blanket was left on my desk (it's a big desk), and Marsh decided that is her place now. If Frisby wants to sit on the blanket with her, Marshmallow has decreed she must have a bath. Frisby endured a few cleanings, then gave up. Frisby naps in places where she can keep an eye on me.

Images are from the Catoonizer.

I love hearing about your cats. My friend Rachael in Georgia, who is also a writer and has a houseful of cats, puts up descriptions of her menagerie (two dogs as well) and it's always entertaining.

You know that I love when you talk one in a while about the small things in your life, like your cats, your work, your family? Keep writing, it really brightens my day <3

What Massimo said. And, in addition, the rest of your blog always helps my days. It's the first thing I read after the news. It really cheers up the mind.

Ernie and Fuji are basically outdoors cats. We call them the Bash Brothers. In the winter they like to come in at night to sit on laps and sleep. They recently discovered that a laptop makes for a lovely, warm sit. We rarely see them in the summer (only at feeding time).

Boogie black kitty is aging, and lurves my spouse. She follows him like a dog. Her favorite place is on him somewhere (lap, legs, stomach). She especially loves being nose to nose with him. Lately, I've become tolerable, and she'll sit on me, too.

Thanks for this. We have 5 of our own and I take care of 5 barn cats. Marvelous animals, all!