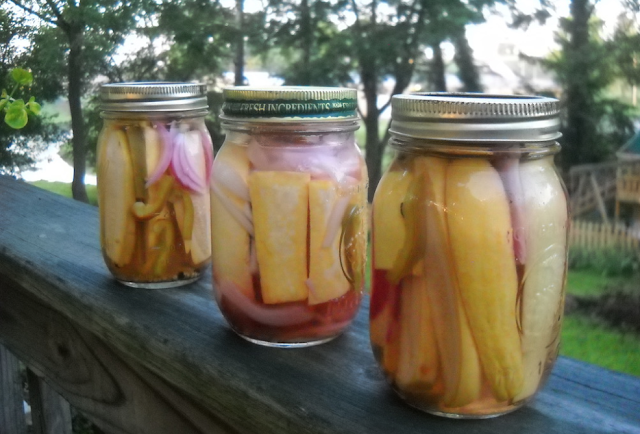 The summer squash was the first vegetable to ripen in my garden, and I'm not a big fan of cooked squash. It was Princess's idea to plant it. While looking up how to preserve all this straight-neck squash, I came across the idea of squash pickles. Now, I've tried making pickles before with cucumbers, and never had much luck. However, I had enough squash to experiment. Many of the recipes online contain sugar, which I did not want, so I kept looking until I found this easy recipe at Serious Eats. Then I changed it to suit my own taste.

I made the pickles and stashed them in the refrigerator. You are supposed to wait 48 hours before eating them, but I got busy, then tried them about four days later. They were crisp and tasty! The squash is not much different from a cucumber pickle, with the taste coming from the other ingredients. When I had enough garden produce for my first salad (cherry tomatoes and bell pepper), I also cut up a couple of squash pickle spears into it, and that was good, too! Imagine- me putting squash in a salad. I was so proud of my pickles that I've given a jar away already. Continue reading if you want my version of the recipe.

Clean four pint jars and lids (for refrigerator pickles, they do not have to be official canning jars). Combine vinegar, water, and salt in a saucepan and bring to boil. Put a half teaspoon of each of the spices into the bottom of each jar. Cut onion and pepper into small pieces. Cut off the ends of the squash, do not peel, and slice into spears as long as will fit to the jar shoulders. Leftover pieces can be added if you have the room. Load the spears into the jars. Add some onion and pepper before you run out of jar space. Then squeeze more squash into the jar until it's well-packed. Pour the boiling brine mixture over the squash, leaving 1/2 inch headspace. Jiggle the jars to release any trapped bubbles, cover with lids, let cool, and then refrigerate. Wait at least 48 hours before eating.

You'll probably have onion left over, and maybe pepper if you used a large one. Hey, make a salad! They say that if you have a lot of squash, you can vacuum-seal the jars with a safe canning method, but the resulting pickles will not be as crisp as the refrigerator technique. You can use regular table salt if you don't want to buy pickling salt, but the additives might make the brine look cloudy. You can also cut your squash into slices instead of spears if you prefer.

When the pickles are all eaten, you can use the leftover spicy brine as a starting point for homemade salad dressing.

Mmm, sounds great, I'll have to give these a try!