My Garden in June 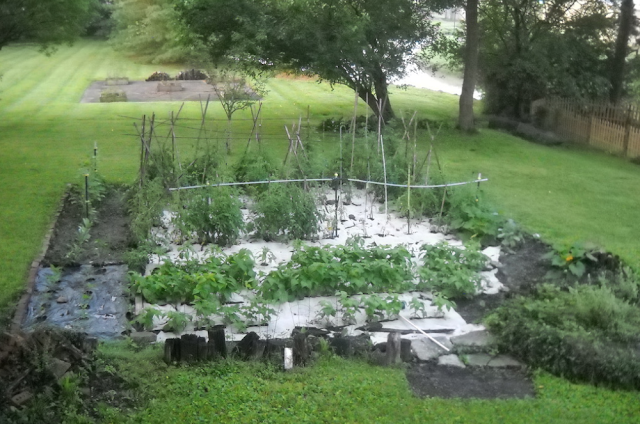 The garden is bigger this year because Princess wanted me to plant her favorite vegetables as well as mine. The landscape fabric I've been using for years was not enough. I put some old black plastic down on the left to accommodate various colored peppers and jalapeños. Behind them is a row of cauliflower, then the cucumbers between the fenceposts. In the back half, I have four rows of tomatoes on trellises. I lost a few tomatoes to juglone poisoning (my black walnut tree is a killer), and replaced them with smaller plants in that bare spot. Then a row a bell peppers you can hardly see, and three rows of bush beans in the front. Eggplants are around the very front and sides, but they are still small. Summer squash and marigolds are planted around the edges. There is one lone zucchini on the far right. Since the rest didn't sprout, I have planted some summer spinach in that area. I also have one lone butternut squash coming up from last year. Extra eggplants and cauliflowers are tucked into odd corners where I thought there was room. This year's layout is pretty odd altogether.

That junk in the front is a "fence" of railroad ties that was originally supposed to separate the yard from the driveway, but I don't do driveway maintenance and now I have to mow it. The raised garden on the right made of ivy-covered railroad ties is for perennials: strawberries and catnip. Both are doing well. In the back you might see a hosta nursery under the leaning tree and my compost piles near the fence. Further back, my neighbor has raised beds of tomatoes on what used to be a basketball court. He planted much later than I did. And the river is almost at its peak.

So far, I've enjoyed many strawberries, squash, a couple of peppers, cherry tomatoes, and the beans are starting to come in. My canning jars are ready for bean processing time later this week. Then there will be tomatoes and salsa. The squash, eggplant, peppers, and cauliflower will be frozen, and I only expect as many cucumbers as I will eat.

Wow! I envy your garden space! and your back's ability to do all that heavy lifting! Good work, MissC!

Not much heavy lifting in the garden, honestly. I do much more of that at work!

Thanks for posting. I love looking at other people's gardens.

For you, Marilyn, I need to get pictures of the flowers in the front yard!

Fantastic to see your garden! My tomato plants were a bust this year, but the strawberry plants in the planters are doing nicely.

Wow! Looks great. Wish I was your neighbor, I'd be begging for your extras.

Your garden looks amazing! Mine is smaller, but a bit more specialized: I have three separate plots: two in front of the house, one with roses and herbs (thyme, chives, oregano, dill, rosemary, sage, basil, and parsley) and the other with vegetables (tomatoes, potatoes, jalapenos), and a third around the side of the house with zucchini, yellow longneck squash, and acorn squash. I'd like to go big like you did, but I lack the space.