When the Internet Picks a Name 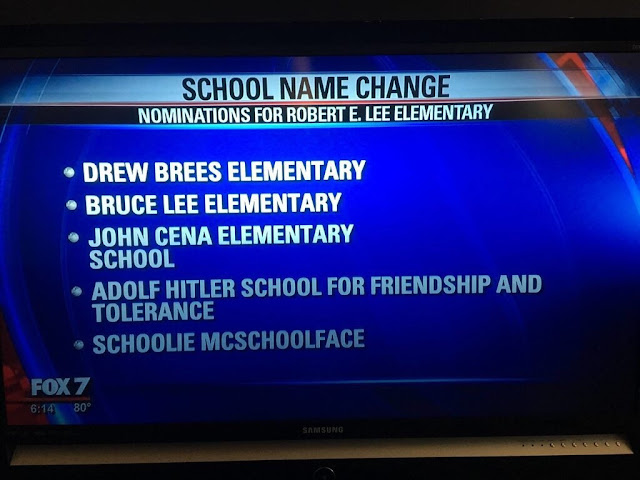 This is why you do not leave most things in the hands of the general public.  First of all, in a couple of decades 'Drew Brees', 'Bruce Lee', or 'John Cena' are going to be about as relevant to people then as 'Fran Tarkenton', 'Roy Rogers', or 'Michael (Eddie) Edwards' are to people today.  As for the other two "suggestions", that's just fools being fools.

Secondly, there is nothing wrong with Robert E. Lee Elementary School. He was a famous American; a graduate of West Point who acted in accordance with his conscience when it drove him to decide in favor of following his home state (Virginia) when it seceded, and is at least as worthy of being honored by having a building, park, or other public ediface named after him as any other general or politician that had come before or since.  But because he fought on what has, some 150 years later, been determined to be the "wrong" side the social justice warriors have decided that he is to be cast onto the refuse heap of history.

So maybe we should honor those who are doing so much to make sure that our precious little snowflakes will never have to contend with such a horror as a school named after a Civil War general again, and name it something like "Bleeding Hearts Elementary".