This is a special political edition, due to the circumstances of the last couple of days. 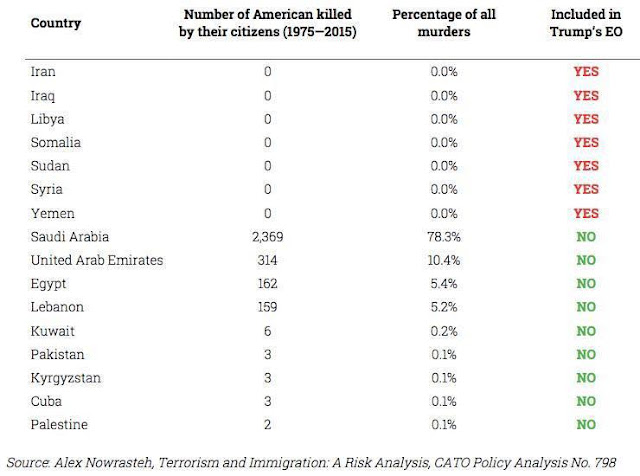 Where Do Terrorists Come From? Source: The Cato Institute.

Countries Listed On Trump's Refugee Ban Don't Include Those He Has Business With.

Here Are The Brave Soldiers Trump Just Banned From America.

Oscar nominee Asghar Farhadi won't be able to attend the Academy Awards ceremony because of the ban.

Those who hold green cards and valid visas and were out of the country this weekend can't get back in to the U.S. Some are missing school or work. Some can't return to their families here.

A 5-year-old American boy was detained temporarily because he was traveling home from Iran.

Other Americans and their non-American parents are affected.

Many people who hold dual citizenship are also banned from entering the U.S.

It's affecting people who just need to travel through the U.S.

Here are pictures from the immediate protests at airports around the country.


For every reply to this tweet with a hand-drawn message of support for immigrants, Muslims, and/or refugees, I will donate $5 to the ACLU.
— Hank Green (@hankgreen) January 28, 2017

You need to read the replies to this Tweet -just click on the date stamp. So far, he's donating over $3,000.

Thank you for posting this essential information.

I voted against Trump. A life-long Republican, I voted for Clinton because she had the best chance to defeat the racist, Fascist, bigot that is Donald Trump.
I just want to know what is the Over/Under on his making it through the first year?

I THINK PRESIDENT BANNON IS DOING A HECK OF A JOB! HE'S GETTING MORE MENTIONS THAN HIS SPOKESMAN TRUMP!

Where was your outrage when Obama did the same thing?

That was far from teh same thing.
https://www.washingtonpost.com/news/fact-checker/wp/2017/01/29/trumps-facile-claim-that-his-refugee-policy-is-similar-to-obama-in-2011/

Oh, really. Obama bombed 5 of the 7 countries President Trump banned.
Did Obama do that just for fun?

check out the chart on snoops, totally fake.

It's on Snopes, http://www.snopes.com/terrorist-attacks-entry-restriction/ but is not fake. Did you read the entry?