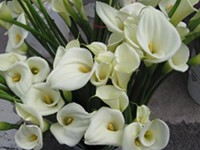 In an interview years ago, Alex Santoso of Neatorama was asked what he considered the most important blog on the internet. He replied that it was Nothing To Do With Arbroath ("of course!"). Sadly, we will no longer have that resource updated daily.

The anonymous British blogger who only went by Kev quit his daily posting on November 24 due to poor health. He was eventually hospitalized and diagnosed with cancer. His many readers and fans wanted to help in some way, but Kev always guarded his privacy, and was too proud to accept help. He never revealed where he lived, or even his last name. His last post was on January 16. About a week ago his cousin in Canada left a comment that Kev had passed away.

The funeral notice for Kevin Norman Gray has now been posted. We will miss him.

Thank you for alerting us, I'm only visiting his blog weekly now instead of my long habit of daily visits and might have missed this information. I'm so saddened by this news. Reminds me to thank you, Miss C, for also being one of my daily visits, especially in these crazy times in the USA, I personally would go wacky without your humor here and elsewhere to divert me... KaraBoo in Ohio

So sorry to hear this, Miss C. He sounds like quite a character and characters always leave huge holes in our lives.

:( That was an excellent source of information. He wil be missed.

You led me to Arbroath in the first place. I miss him greatly.

Oh, dear. Poor Kev. I hope his last days were not to stressful for him--that he at least had enough to eat and was comfortable. I loved Arbroath, and have missed his posts. I guess I will have to miss them forever now, as I can't imagine another person with the same knack of finding unusual, quirky, but very interesting things. RIP Kevin.

I will miss him.

Thanks for posting this here, you've shown a few of us the way over to Kev, and we've enjoyed him for years. He's missed, and will be missed, as his humor and intelligence came through so well. I hope his loved ones gain some peace learning how well regarded he is in this corner of the internets.

I was just on his website to get an update. Sadly I saw that it was the same one I had read earlier. This hurts my heart. I had enjoyed him and his humor. Miss? You led me to him and thank you for letting me know what happened. Bless his family.

I've been following Arbroath for years and was quite shocked to hear news of his medical issues back in November. I am doubly shocked to learn of his passing. Kevin will be missed.

Miss C - Thanks for posting the update. I've been going to Arbroath every morning looking for a new post.from Kev. His passing's impact stretches further than he could ever know, and will leave a gap in many hearts. Medical privacy laws would not allow us to know if he'd passed from the cancer or the heart-attack inducing diet that was prescribed for him. R.I.P. Kev - J

Thank's for the post. I haven't seen any other blogger mentioning Kev's passing. He will be missed.

I miss Kev. Thank you for the info.