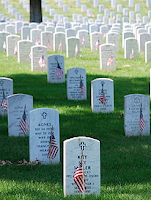 The story of The Lost Battalion.

The Last Letters From World War I Literary Heroes. Poets Wilfred Owen and Edward Thomas, and editor Roland Gerard Garvin all died in the War to End All Wars.

A little boy visits his father's grave at Arlington. It's a gripping photo included in the gallery of Memorial Day Tributes Around the World.

10 Things to Remember About Memorial Day. It's not just an excuse for a three-day weekend.

Honor Flight is a program to bring World War II veterans to see the memorial built in their honor in Washington, D.C. You can help fund these trips.

A gyroscope can give you super powers! Yep, when science doesn't illuminate, at least it can baffle you entertainingly.

The Great Britain Olympic Team is soon to be available as a Lego set. Even if they never win a medal, this is a gold-medal marketing idea.

10 Latin Phrases You Pretend to Understand.


What You See Vs. What They See.

How I Stopped Worrying (about science accuracy) And Learned to Love The Story.  (via Bad Astronomy)