An unemployed man is desperate to support his family of a wife and three kids. He applies for a janitor's job at a large firm and easily passes an aptitude test.

The human resources manager tells him, 'You will be hired at minimum wage of $5.85 an hour. Let me have your e-mail address so that we can get you in the loop. Our system will automatically e-mail you all the forms and advise you when to start and where to report on your first day.'

Taken back, the man protests that he is poor and has neither a computer nor an e-mail address.

To this the manager replies, 'You must understand that to a company like ours that means that you virtually do not exist. Without an e-mail address you can hardly expect to be employed by a high-tech firm Good day.'

Stunned, the man leaves. Not knowing where to turn and having $10 in his wallet, he walks past a farmers' market and sees a stand selling 25 lb. crates of beautiful red tomatoes. He buys a crate, carries it to a busy corner and displays the tomatoes. In less than 2 hours he sells all the tomatoes and makes 100% profit. Repeating the process several times more that day, he ends up with almost $100 and arrives home that night with several bags of groceries for his family.

During the night he decides to repeat the tomato business the next day. By the end of the week he is getting up early every day and working into the night. He multiplies his profits quickly.

Early in the second week he acquires a cart to transport several boxes of tomatoes at a time, but before a month is up he sells the cart to buy a broken-down pickup truck

At the end of a year he owns three old trucks. His two sons have left their neighborhood gangs to help him with the tomato business, his wife is buying the tomatoes, and his daughter is taking night courses at the community college so she can keep books for him.

By the end of the second year he has a dozen very nice used trucks and employs fifteen previously unemployed people, all selling tomatoes. He continues to work hard.

Time passes and at the end of the fifth year he owns a fleet of nice trucks and a warehouse that his wife supervises, plus two tomato farms that the boys manage. The tomato company's payroll has put hundreds of homeless and jobless people to work. His daughter 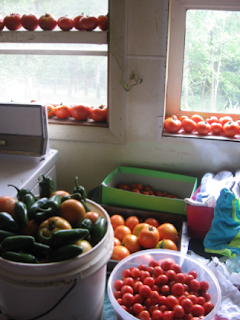 reports that the business grossed over one million dollars.

Planning for the future, he decides to buy some life insurance.

Consulting with an insurance adviser, he picks an insurance plan to fit his new circumstances. Then the adviser asks him for his e-mail address in order to send the final documents electronically.


When the man replies that he doesn't have time to mess with a computer and has no e-mail address, the insurance man is stunned, 'What, you don't have e-mail? No computer? No Internet? Just think where you would be today if you'd had all of that five years ago!'

'Ha!' snorts the man. 'If I'd had e-mail five years ago I would be sweeping floors at Microsoft and making $5.85 an hour.'

Which brings us to the moral of the story:

Since you got this story here on a blog, you're probably closer to being a janitor than a millionaire

Sadly, I received this joke by email. I grow plenty of tomatoes, but I’m paid like a blogger.

Sounds like an update of Somerset Maugham's short story The Verger.