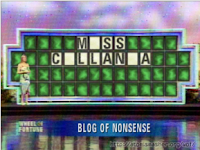 Focus is overrated and distraction has its benefits. What you lose in productivity with your terrible attention span, chances are you’ll probably make up in creativity. (via Wired Science)

The 100 Best Protest Signs At The Wisconsin Capitol. Back in the day, you were lucky to get 100 people to carry signs, much less that many with creative slogans worth reposting.

Restaurants to Die For. Guaranteed to impress a date -or scare him/her off forever.

Eight charts that explain everything that's wrong with America.
A simple solution to the budget crisis in Wisconsin.

Power of Decision is a 1958 Strategic Air Command film that illustrates how to start a nuclear war. In this scenario, the “success” of a nuclear war was defined as not having the will of the enemy imposed on the US, despite millions of citizens killed. (via Metafilter)

What Happens When You Stick Your Head Into a Particle Accelerator. Anatoli Petrovich Bugorski was extremely lucky; don’t try this at home. (via Boing Boing)

The 6 Most Epic Escapes Across Hostile Territory. When you’re desperate and have nothing left to lose, it’s time for a Hail Mary play. NSFW text. (via Gorilla Mask)

How far is the Moon from Earth? Knowing the numbers and visualizing the vast distances of space are very different things.