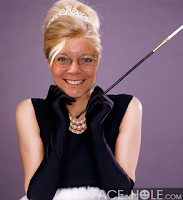 The iPad was apparently developed for the convenience of cats, since the touch screen doesn't require typing, or even opposable thumbs! Watch Iggy the cat use a couple of programs, and even manipulate the desktop on an iPad.

One mistake many people make is to make the words "a lot" into one word. But Allie takes this mistake in stride, because each incident makes her think of an imaginary creature called the Alot. (via Buzzfeed)

There’s a Brownstone in Brooklyn With a Secret Passage to the Subway. It would be so cool to live there, except for the fact that it belongs to the police. (via YesButNoButYes)

The Pac-man ghosts discuss their favorite TV shows. Things can get ugly when you dis someone's taste in entertainment.

Cool Guys on Motorcycles. When the dorkiest guy in a collection of pictures is Mick Jagger, you know you're in for a treat. (via Everlasting Blort)

Bathroom Rules ... and Wisdom. Nothing drives an important message home like kicking them where it hurts.

The Most Awesomest Thing Ever may change from day to day as the tournament continues. You can take part by ranking the more awesome of two things at a time. (warning: sound)