Good Reads for the Day 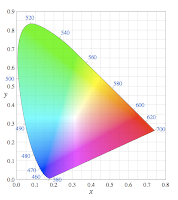 Is magenta a color, or just something our brains made up? It doesn't exist in the light spectrum, but it exists somewhere.

How the Crash Will Reshape America. You more you know, the better prepared you'll be for the changes ahead. (via Metafilter)

What if life began on earth more than once? Scientists are looking into the possibility that there may be life forms that don't connect with our evolutionary tree at all.

The Voyager probe is carrying a record album of music and sounds away from the solar system. Here are the songs aliens may find someday.

Take a peek at NASA's Constellation program, which will replace the space shuttle. The first test flight will be in July. (via Bad Astronomy Blog)

Klan Economics in Black and White (But Mostly White). For decadess, it operated like a pyramid scheme for bigots.

Traditional media is in trouble, if not dying out already. How will we get our news in the future?