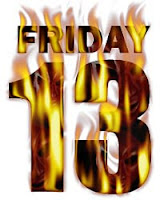 Why is Friday the 13th considered unlucky? Because people will believe anything.

The Top 18 Most Addictive Drugs On Earth. Number one was easy to guess, but some of the others were surprises. (via Interesting Pile)

NASA procedures for cleaning the bathroom on the International Space Station include taking tricorder readings to find fungus and bacteria. Except they call the device LOCAD-PTS.

Executives at Goldman Sachs and Morgan Stanley say they want to repay bailout money quickly. Suddenly, it appears that business is easier without government restrictions.

The science of shark repellants. A lot of different ideas have been tried, but they're really difficult to test. Any volunteers?

Cracking the case of the poison processed peanuts. The process reads like a mystery novel, with more at stake than in any fictional whodunnit.

25 People to Blame for the Financial Crisis. It took so many failing so spectacularly to get us into this mess.