On The Rise of Skywalker 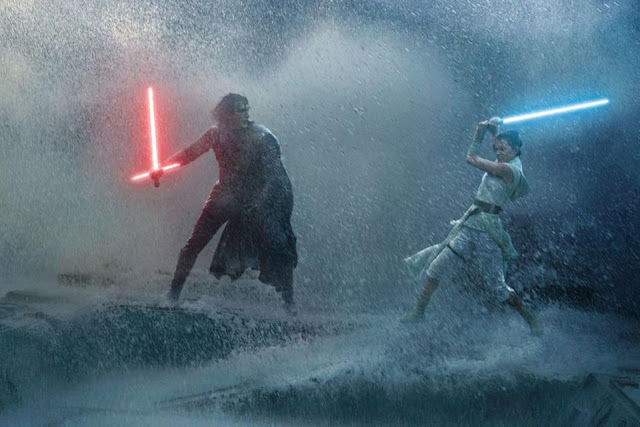 Almost a month later, I've finally written down my thoughts on The Rise of Skywalker. I'm not a Star Wars scholar, just a fan from 1977 who has spent way too much time parsing a popcorn movie. I've seen The Rise of Skywalker twice now, and had time to let things sink in (it also took me some time to jot my thoughts down). The critique is behind a break, in case you don't care to read any of it, or if for some reason you are still avoiding spoilers.

The Rise of Skywalker had a lot going against it. Disney's schedule of a new chapter every two years did this one in. Between The Last Jedi and The Rise of Skywalker, they had to deal with Carrie Fisher's death, changing the director, and reportedly several rejected scripts. Any of those things would be reason enough to add another year to the production schedule, but somehow no one saw the value in that.

The more I think about the mess of a movie that is The Rise of Skywalker, the more I believe that it may have been saved if it had been split into two films. Why not- they split the final Harry Potter book into two films, as well as the Twilight series and The Hunger Games, didn't they? Of course, Star Wars isn't based on a series of novels in the same way, yet it could have been done. But alas, Disney was stuck on George Lucas' throwaway idea of a nine chapter arc. It couldn't have been because of the expense, since two movies would have made a ton of money, especially if they were done right.

The ninth chapter had way too many things they felt that they had to include.

1. Ray's parentage
2. Leia's death
3. Palpatine's return
4. The standard two big battle scenes to begin and end the movie
5. Rey's temptation from the Dark Side
6. Setting up some characters for spinoffs
7. Declaring Poe's sexual orientation
8. Lando's return
9. Kylo's redemption
10. The "cute" new characters
11. Force ghosts
12. Some humor and random callbacks
13. Appearances by every possible past character for a big, conclusive ending

If they had spread those things across two movies, it would have been more enjoyable. The penultimate movie could have taken the time to set up (and maybe even explain) Palpatine's return and used his appearance as its big ending. It could have drawn out Kylo's struggle with the light as well as Ray's struggle with the dark side. Leia's death could have been foreshadowed a bit, thereby making it more important to the penultimate movie. Or it could have happened early, to liven up the first act and galvanize the Resistance.

Yes, Finn, Poe, and Rose would have gotten more screen time, which would have been just. Finn being Force-sensitive is obviously a set-up for a spinoff, but it was so minor and meaningless in TRoS that it felt like an afterthought. Same for the stormtrooper rebellion. We would have liked to have seen Lando do more, but Billy Dee Williams is in his 80s, so I can understand that it might not have been feasible to expand his small role.

Hey, we could have gotten a cliffhanger between the two movies, like Kylo's big decision about his life, or Rey in dire danger from Palpatine. Or maybe end it with the big reveal about Rey's relationship to Palpatine to make us all wonder between the films. Oh yeah, that would have been another rehash of the original trilogy. Let's go with a cliffhanger.

Kylo and Rey's story follows the arc of the classic romance novel, or even fan fiction, which I really can't complain about, because Star Wars is, after all, fiction for fans. Their story is cheesy and fantastical, but it works here mainly due to Adam Driver and Daisy Ridley's acting. Besides, it's hot. And it's one of the few threads that isn't a retread of the original trilogy, which is a plus. But that doesn't mean it's altogether a good thing. That's due to the real disconnect between classic romance novels and real life.

Kylo Ren may be the big bad villain here, but he comes with a backstory. He's a man who was born into Jedi royalty, with privilege and supernatural genetic ability, who thinks he's earned everything he has. Meanwhile, he can't even win a lightsaber battle (with the exception of fighting Finn, who was out of his depth). Kylo is toxic masculinity personified. His everyday mood is anger, and his goal, conscious or not, is to defeat every other male in his territory, including his father, his uncle, Hux, Snoke, and eventually Palpatine in order to climb the hierarchy toward becoming Darth Vader. Ha, if Vader were still around, Kylo would be competing with him.

Then he meets a woman who is as powerful as he is. She can reach into his mind, and then beats the shit out of him with a lightsaber in their first movie. He becomes obsessed with either killing her or possessing her. He makes up his mind that possessing her is better than killing her only after she runs him through with his own lightsaber -although there is another woman in play in that scene.

Rey, of course, is the everywoman of the romance novel. She resists the bad boy, but is background attracted to him, too. The problem is, she thinks she can change him with her selflessness and sense of right and wrong. And she does, just like in the romance novels. But that doesn't happen in real life. Romance novels are supposed to be escapist entertainment, things women read when they want to indulge in what they want the world to be. That's fine for women who know better, but is a problem when it influences the way young women see the world as it is.

Kylo/Ben had to die, and I saw that as soon as The Force Awakens, because like Darth Vader, he had killed too many people to ever live out his life no matter how sorry he was. If the viewer didn't care about the planets he wiped out, they cared about Han Solo. And Kylo never even got to defeat the bigger bad guy, Palpatine. That was all Rey, as it should have been, although having both of them defeat the emperor together would have been fine, too.

Bringing back the emperor seemed like such a cheap gimmick from the beginning, but seeing the opening crawl begin with THE DEAD SPEAK! was so very bad, it set up the movie for failure right away. Not only did the film never explain his survival, they had various characters comment on how they didn't know why he survived. He was just suddenly there.

I read somewhere that if both Luke and Darth Maul could fall down a bottomless shaft and survive, so could Palpatine. Luke was caught by Lando in the Millennium Falcon (while his hand floated away), and I didn't see Solo, so I don't know how Darth Maul's survival worked. But okay. Still, the reveal of Sheev's existence could have benefited from the two-movie idea.

What I didn't like was how Palpatine's survival negated Darth Vader's only good deed. Sure, he saved Luke's life in that moment, but he didn't eliminate the galaxy's biggest danger as we assumed at the time. That was then mirrored by Kylo/Ben's one good deed -sacrificing his life to save the hero's life, while not eliminating the villain. That's okay ...if you don't think about it too much.

That bit about Luke and Leia knowing Rey's parentage all along was totally unnecessary and make no sense. It actually hurt the narrative.

Finn having something important to tell Rey right before they sank into quicksand was dumb and unnecessary, especially since it was never important enough to tell her later. It was supposed to be about him being Force-sensitive, but what difference does that make when you think you are dying right now?

I liked the buildup about "new" Force powers. In The Last Jedi, the cross-space mind link (and by association, the Force projection business) was explained in a small aside from Kylo Ren: "You're not doing this. The effort would kill you." Snoke later took credit for the trick. He was supposed to be very powerful, but still failed to read minds properly in the end. It turns out that both Kylo and Rey are much stronger in the Force than even they knew, because they kept the mind link going. Meanwhile, that "deadly effort" proved to be true when Luke used Force projection, and later when Leia tried the long-distance mind link. Of course, every new power has its limits, which is why Kylo died. Yep, Rey, who suffered no damage by healing Kylo, ended up being the most powerful Force user ever.

The dead-not-dead stuff was used too much and too quickly. Zorii Bliss and Babu Frik were assumed dead when their planet was blown up, but no. Chewy was assumed dead when the transport exploded, but no. Neither incident left the surviving characters, or the audience, a moment to mourn or even think about it before they popped back up, alive and well. Even Rey didn't spend much time being "dead," so the only way we know someone is really gone for good is when their body dissipates into the air.

Making Poe a former drug runner was disappointing, and did not fit in with what we knew about him. They were obviously trying to retcon his character into that of the lovable scoundrel Han Solo. We've seen way too much of that sort of thing in this new trilogy already.

Another annoying detail that stood out: The "secret intelligence" the Resistance intercepted was pretty much an announcement from Palpatine- he would begin an attack in 16 hours. Attack who? The New Republic is kaput, and the Resistance is one small unit on some small planet. And why 16 hours? That puts a knot in all that planet-hopping, especially considering that the message was old when they got it. They should have used a different measure of time. Attacking in 16 parsecs would have been more plausible.

That dagger. The dumbest unnecessary nonsensical thing in the movie. Why have two McGuffins, when one is too many? Leaving that out would have freed up time for more important things.

Not Thinking About It Too Much

HOWEVER... it's a Star Wars movie, and no Star Wars movie is perfect. You can't expect a tale of magical space wizards to make sense. You can ask for them to be internally consistent, but that would have never happened entirely. Yes, The Rise of Skywalker could easily have been a lot better, but it was still a fun movie. When I saw it the second time, I took some young people who hadn't seen it, and I didn't criticize the film beforehand, but explained the constraints Disney put on themselves. I just said, "Don't expect it to make sense. Just enjoy the ride."
Posted by Miss Cellania at 1/13/2020 02:00:00 PM

1. I salute you. You've seen it twice while I'm still
waiting for the DVD.

Enjoyed the read though. Well said.