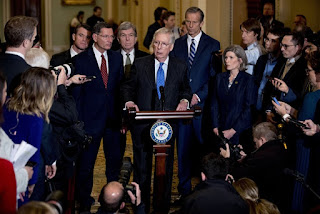 The Public: Yeah, right. As if.

So what do we do about it? Vote for whoever will replace Trump. But that's only the beginning. We must also vote against all those who are obstructing justice in the senate trial. And get your neighbors to do the same. While you're at it, remember how your representative in congress approached the rule of law as it pertains to the president. That's the way we get democracy back.

Remember, you can share stuff from here if you click on the title, and then copy the URL at the top.

I thought the House of Reps is supposed to have an iron-clad defense of impeachment before heading to the Senate for the "trial." If they do not, should they have voted for impeachment?

And if the House or Senate wanted information from the White House (documents, people to testify, whatever) and the WH refuses, then the House or Senate should use the third branch, the courts, to determine if the WH should submit the info. Thus this is not an impeachable offense.

It has been tiring to hear some many democrats call for impeachment since Trump was elected.

Yet another reason I am not a fan of either party.

The framers of the constitution didn't foresee a situation where the president AND the leader of the senate, never mind so many lesser (R) congresscritters would be so corrupt as to take their political game of chicken to this level of open corruption. There's also a generous side helping of turning people off by politics in general "Yet another reason I am not a fan of either party" that, along with our 24/7 Fox News/tRump State Media hysteria pollutes the waters of truth and reason. Sad situation, American democracy is on life support.

Obstruction of Congress? Uh, acting like a check and balance? What a dick...
By the way, "Quid pro quo" oh, you mean every negotiation EVER? Bought a car or a house? Quid pro quo...

BS, the dems first found him guilty then had a trial, nothing came up, russian collusion. then did stompy feet like a 2 year old. Eveyone knew about Biden, the Dem reps did the same thing with Ukariane, but waited until Biden was no longer the front runner and then came the second trial.