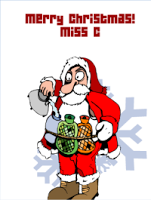 12 Things to Do to Your Friends' and Family's Tech to Get Them to Stop Bothering You. No, not ways to mess them up and destroy your reputation as the family tech guru, but a serious tech maintenance list.

The 20 best Asian American films of the last 20 years.

How Santa Survived the Soviet Era. Ded Moroz' pagan roots were an asset.

What Happens if You Commit a Crime in Space? Read what rules govern space flight as of now at Today I Found Out.

Wannamaker's, one of the earliest department stores in America, had a foolproof Christmas promotion in 1897. They had a "bargain day for cats," in which they displayed and sold the hot Christmas gift of the year, angora cats, priced from $10 to $40. (via Strange Company)

Copycat IKEA Swedish Meatballs. (via Nag on the Lake)

Why We Love Rudolph. The red-nosed reindeer has had several boosts in fame, all with interesting stories behind them.

Black Med Students At Former Slave Quarters Say 'This Is About Resiliency.' (more links at Metafilter)