Is The Walking Dead All a Dream? 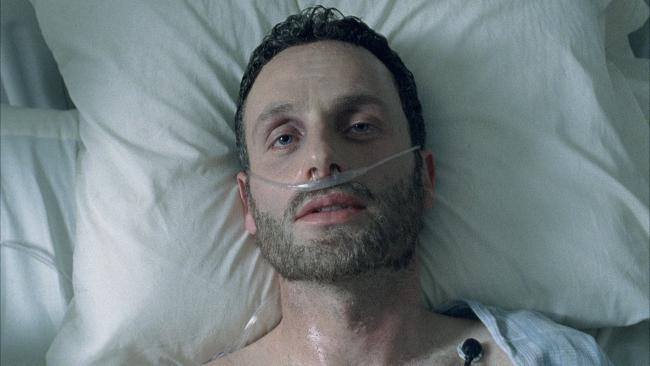 There’s a discussion at Warming Glow about the possibility that The Walking Dead will end when Rick Grimes wakes up in the hospital and finds it’s all a dream. That would be …disappointing, but a few rather hilarious scenarios were posited.

The first, addressed in the post, would be Rick waking up in the hospital as he did in the first episode, only there’s no zombie apocalypse. Lori and Shane are there, Carl’s in college, his doctors are Hershel and Dale, Maggie and Beth are nurses, Glen and Daryl are lab techs, and Merl comes to take out the trash. The rest of the cast are seen as various friends and loved ones.

The second scenario is cobbled together from the comments. Rick wakes up in bed with  …Suzanne Pleshette! He goes to the shower, but Patrick Duffy is in there. Then he realizes he’s at St. Eligius, which is contained in Tommy Westphall’s snow globe. Whew!

The final scenario, from a comment, is actually a pretty good idea. Rick dreams that he wakes up in the hospital, where his family is with him and the cast members are hospital employees. It’s like a cast reunion. Everything seems hunky-dory until Rick actually wakes up, back in the zombie apocalypse. I could go for a scene like that.