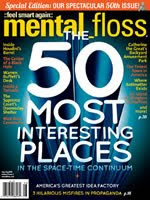 Mental_floss magazine just reached a publishing milestone. To celebrate, they put out a list of 50 Amazing Facts for Our 50th Issue.

Many of the scientists who left ScienceBlogs are now gathered at a new blogging collective called Scientopia. You’ll find a list of their members elsewhere.

10 Notorious Criminals Proven Innocent After Execution. Most were victims of a rush to judgment, including two cases in which the victims showed up after the execution!

Predict the Future Using Your Fingernails (and other weird methods).

The Do Not Call Registry now has over 200 million numbers. For those of you too young to remember, telemarketers put up a real fight to keep the system from going into effect.

You can learn to influence people by giving them the three things their egos need. Like I tell my middle school daughters: Don't try to impress people, but make them feel good about themselves and then they will love you.
5 Superhero (and Supervillain) Origins. Everyone has a backstory, even if it doesn't make any sense.
Posted by Miss Cellania at 8/04/2010 06:59:00 AM