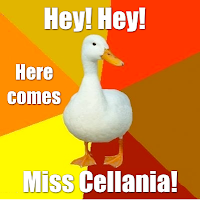 Kanye West started a Twitter feed. Someone figured out his Tweets made great captions for New Yorker cartoons.

This is such a short and simple video and I can't stop watching it again and again. A kitten tries to jump and fails.

5 Ridiculous Attempts at Crime Fighting (That Worked). When crazy hero meets no-so-smart criminal, the results can be better than a movie. (NSFW text)

Do big cats get high on catnip the way house cats do? Seven out of eight cats at Big Cat Rescue say yes!

Catch up on the whole story behind Antoine Dodson and the Bed Intruder meme.

Interesting kittyvid. It doesn't seem that the kitten was unable to jump or that it misjudged the distance, but rather that it couldn't get purchase for its hind legs on the slippery table.

A good video for defining "Schadenfreude."