Its a fantasy! Its a nightmare! Its a sitcom! Its an oft-used fantasy and a nightmare, being stranded on a deserted island in the tropics. In the fantasy scenario (and we’ve all done this), its “If only I had him/her all to myself, with no interference from the outside, maybe on a desert island, maybe then he/she would pay attention to me...” plus the beach, the sunshine, and lack of boss/parents/spouse/priest helps make the fantasy look  pretty good.

There is also the dark side; the nightmare. How could I could without my computer/cigarettes/TV/spouse/whatever? Would I be able to survive? To keep my moral fiber? To eat seafood? The whole idea lends itself well to fiction: Robinson Crusoe, The Swiss Family Robinson, Gilligan’s Island,  Lord of the Flies, Castaway, Survivor, Lost. I’m sure there’s more.


If you haven’t seen the Tom Hanks movie Castaway (I haven’t), at least you’ve seen the FedEx spot that summed it up.


How to Chunk a Pineapple Like a South Seas Island Boy. (via Ursi’s Blog)


Send a message in the form of a hula dance! (via the Generator Blog)


Read (and see) the history of screensaver Johnny Castaway, and download those classic screensavers.


The question remains: Ginger or Mary Ann? The answer could get you into trouble!


Maybe a pie fight will decide between the two! 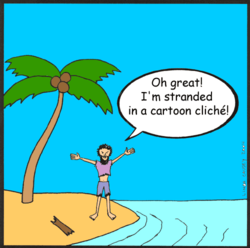 A rather inhibited engineer finally splurged on a luxury cruise to the Caribbean. It was the "craziest" thing he had ever done in his life.


Just as he was beginning to enjoy himself, a hurricane roared upon the huge ship, capsizing it like a child's toy. Somehow the engineer,desperately hanging on to a life preserver, managed to wash ashore on a secluded island. Outside of beautiful scenery, a spring-fed pool, bananas and coconuts, there was little else. He lost all hope and for hours on end, sat under the same palm tree.


One day, after several months had passed, a gorgeous woman in a small rowboat appeared. "I'm from the other side of the island," she said. "Were you on the cruise ship, too?"


"Well, I whittled the oars from gum tree branches, wove the reinforced gunwhale from palm branches, and made the keel and stern from a Eucalyptus tree."


"But, what did you use for tools?" asked the man.


"There was a very unusual strata of alluvial rock exposed on the south side of the island. I discovered that if I fired it to a certain temperature in my kiln, it melted into forgeable ductile iron. Anyhow, that's how I got the tools. But, enough of that," she said. "Where have you been living all this time? I don't see any shelter."


"To be honest, I've just been sleeping on the beach," he said.


"Would you like to come to my place?" the woman asked. The engineer nodded dumbly.

She expertly rowed them around to her side of the island, and tied up the boat with a handsome strand of hand-woven hemp topped with a neat back splice. They walked up a winding stone walk she had laid and around a Palm tree. There stood an exquisite bungalow painted in blue and white.


"It won't be coconut juice," the woman replied. "I have a crude still out back, so we can have authentic Pina Coladas."


Trying to hide his amazement, the man accepted the drink, and they sat down on her couch to talk.

After they had exchanged stories, the woman asked, "Tell me, have you always had a beard?"


"No," the man replied, "I was clean shaven all of my life until I ended up on this island."


"Well if you'd like to shave, there's a razor upstairs in the bathroom cabinet."


The man, no longer questioning anything, went upstairs to the bathroom and shaved with an intricate bone-and-shell device honed razor sharp. Next he showered -- not even attempting to fathom a guess as to how she managed to get warm water into the bathroom -- and went back downstairs. He couldn't help but admire the masterfully carved banister as he walked. 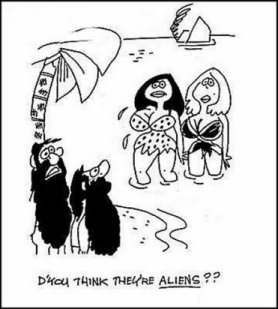 "You look great," said the woman. "I think I'll go up and slip into something more comfortable." As she did, the man continued to sip his Pina Colada. After a short time,the woman, smelling faintly of gardenias, returned wearing a revealing gown fashioned out of pounded palm fronds.


"Tell me," she asked, "we've both been out here for a very long time with no companionship. You know what I mean. Have you been lonely...is there anything that you really, really miss? Something that all men and woman need? Something that would be really nice to have right now!"


"Yes there is!" the man replied, shucking off his shyness. "There is something I've wanted to do for so long. But on this island all alone, it was just...well, it was impossible."


"Well, it's not impossible, any more," the woman said.


The man, practically panting in excitement, said breathlessly: "You mean........??!


"Wow! You actually figured out some way we can check our e-mail here?!!"

If you were stranded on a desert island...

What food would geeks take?

What famous person would you want with you?

Could you catch a cold?

How would you construct a bra?

What book would kids bring?

What movies would comedians want with them?

Would you drink urine  or sea water?

What beer would you long for?

What would people in a bar take?

Three guys are alone on a desert island: an engineer, a biologist and an economist. They are starving and don't have a thing to eat, but somehow they find a can of beans on the shore.


The engineer says: "Let's hit the can with a rock until it opens."


The biologist has another idea: "No. We should wait for a while. Erosion will do the job."


Finally, the economist says: "Let's assume that we have a can opener". 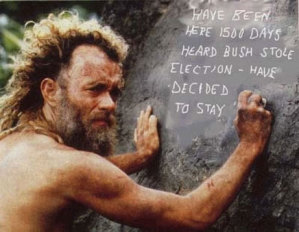 On a beautiful deserted island in the middle of nowhere, the following people are stranded:

And two American men and one American woman

One month later the following things have occurred:

The two French men and the French woman are living happily together in a menage a trois.

The two German men have a strict weekly schedule of alternating visits with the German woman.

The two English men are waiting for someone to introduce them to each other and to the English woman.

The two Bulgarian men took one look at the Bulgarian woman and started swimming to another island.

The two Japanese have faxed Tokyo and are awaiting instructions.


The two Irish men divided the island into North and South and set up a distillery. They do not remember if sex is in the picture because it gets somewhat foggy after a few litres of coconut whiskey. However, they're perfectly satisfied because the English aren't having any fun.

The two American men are contemplating suicide, because the American woman will not shut up and complains relentlessly about her body, the true nature of feminism, what the sun is doing to her skin, how she can do anything they can do, the necessity of fulfilment, the equal division of household chores, how sand and palm trees make her look fat, how her last boyfriend respected her opinion and treated her nicer than they do, and how her relationship with her mother is the root cause of all her problems, and why didn't they bring a cell phone so they could call 911 and get them all rescued off this god-forsaken deserted island in the middle of freaking nowhere so she can get her nails done and go shopping. 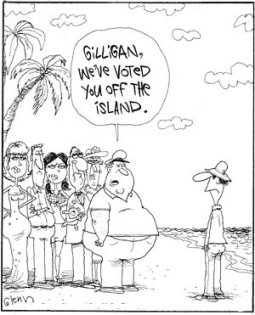 Abe and Esther are flying to Australia for a two-week vacation to celebrate their 40th anniversary. Suddenly, over the public address system, the Captain announces, "Ladies and Gentlemen, I am afraid I have some very bad news. Our engines have ceased functioning and we will attempt an emergency landing. Luckily, I see an uncharted island below us and we should be able to land on the beach. However, the odds are that we may never be rescued and will have to live on the island for the rest of our lives!"

Thanks to the skill of the flight crew, the plane lands safely on the island. An hour later Abe turns to his wife and asks,

"No, sweetheart," she responds.

Abe, still shaken from the crash landing, then asks, "Esther, did we pay our American Express card yet?"


"One last thing, Esther. Did you remember to send checks for the Visa and MasterCard this month?" he asks.

Abe grabs her and gives her the biggest kiss in 40 years. Esther pulls away and asks him, "What was that for?" 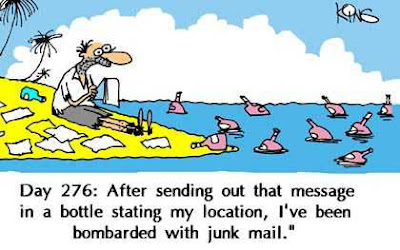 A diver was shipwrecked up onto a lonely and tropical shore. As he stood up he noticed his hands were purple, he looked at his feet and they were purple, worriedly he unzipped his wetsuit and his chest and stomach were purple. With his head in his hands he cried, "Oh my God! I’ve been marooned!"

Thought for today: Centuries ago, sailors on long voyages used to leave a pair of pigs on every deserted island. Or they'd leave a pair of goats. Either way, on any future visit, the island would be a source of meat. These islands, they were pristine. These were home to breeds of birds with no natural predators. Breeds of birds that lived nowhere else on earth. The plants there, without enemies they evolved without thorns or poisons. Without predators and enemies, these islands, they were paradise. The sailors, the next time they visited these islands, the only things still there would be herds of goats or pigs. .... Does this remind you of anything? Maybe the ol' Adam and Eve story? .... You ever wonder when God's coming back with a lot of barbecue sauce?

Original comments after the jump.


AUTHOR: Anita
EMAIL: anitab83@gmail.com
URL: http://www.saynotocrack.com/
DATE: 01/17/2007 06:12:57 AM
I love the economist and can opener joke. I had to sit through a year of Econ in college, UGGGHHH. I could never figure out how I could ace graduate level physics and math courses, but couldn't figure out how to adequately interpret a single line on a chart.

"No, that isn't just a simple demand curve ... see that tiny bump in the middle? It actually wasn't a slip of my pencil, it is where I demand far more money from the University for requiring me to drill this into your thick skull! Once again, a big fat C for you!"

I'm a Mary Ann (with a Ginger chest). I've been 'lost' for two weeks in the first and second seasons of LOST. I watched Castaway. I liked it. :)