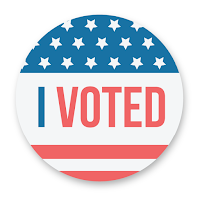 Well, I just voted. Now all that's left to do is wait for the results, except, yeah, I still wanna to encourage more turnout.

Every presidential election that comes around reminds me of how my vote doesn't count. I live in a reliably red state, so reliable that candidates don't bother visiting us. And thanks to the winner-take-all electoral apportionment, my vote is effectively erased when the map lights up.

In the 2016 election, Trump won the electoral college despite losing the popular vote by three million or so. He blamed his popular vote loss on illegal voting in California. No, that's not it at all. Those three million votes included mine. One out of every three voters in Kentucky cast a ballot for Clinton in 2016, yet none of them were reflected in the electoral college.

So why do I vote in every election? Because I love my country. I would never forgive myself if I didn't participate in a chance to shape it for the better. Because my vote should mean something, even if it doesn't determine the outcome. Because my fellow Americans might someday surprise me.

The electoral college has outlived its usefulness, even if you were taught that its purpose was to turn the election over to wise men who would prevent the common people from electing someone who wasn't competent- you see how well that works. The real reason for the electoral college was to appease slave states, since it would count enslaved people toward representation without allowing them to vote.

The outmoded system of federal elections in the US now tilts power to states with smaller, rural populations, meaning people who prefer to stay spread out and away from other people, and diminishes the power of people who prefer to live in densely-populated areas and care what their neighbors are going through. Still, each of those states have more and more people over time who see beyond what their inner circle thinks, or what one TV channel says. And that's why I have hope for the future, and why I will continue voting every chance I get.

In my little corner of Minnesota we are rural, but we are blue.

My wildest fantasy is to find out after the election that you have a new Senator. Let it be true!

I am far away in New Zealand. We have a Mixed Member Proportionate electoral system and it seems to work well. Up until our elections this coming weekend we have a Labour/Greens led government, and they have been touted by the global press as one of the best governments of recent times, mainly due, I guess, to their handling of a racist shooting massacre and the germy pandemic crisis. I like them and I voted for them again in an early vote last week.
The opposition party, they go by the name of the National party, a name surely suited to some right wing German fascists, have been ridiculed of late because of their leader, a woman styling herself after Trump ... even down to the cap ! (although hers is blue) as she flings herself into attack politics (just like Trump) pretends to pray in a church, and says outright lies just to hopefully get into power.
Sigh.
The political colours can be confusing, here in NZ our Labour government, a more for the people party, embraces the colour red, whilst the business/rich people focussed National party goes with blue.
The opposite of the USA' political colours.
I hope you all get your wish and Trump gets dumped, we're in vastly different countries but what your president says and does affects us people out here across the Pacific.

I was taught that the electoral college was about balancing the interests of high and low population states.

In Australia the political colours are also the opposite of the US ones. It can be confusing at times! Although I think Trump and his red hats have ensured I will never get confused again.

Changing electoral systems is difficult. It is rarely in the interests of the people in power to change the system that got them there. But the electoral college seems to be one of the less democratic parts of your system.

The rest of the world is watching your elections with our fingers crossed.

Saying someone who won the electoral college but lost the popular vote should not be president is like saying a football team that outscored their opponent lost because they got less passing yards. Remember that there are actually 50 elections to decide who will be president (one in each state).

Without the electoral college, then about 3 states (or two states and couple of big cities--whatever gets to 50% plus one vote to make a majority) would decide who the president will be--the rest of the country can go pound sand.

Miss Cellania: maybe you should start a movement so Kentucky's EC votes are split amongst the candidates so your vote will mean something more.

I too live in a red state where 1/3 to 1/2 of our population has no representation in our government. Our Senators and Representatives do not waver from the party line so our voice is never heard. We do now have a Democratic governor after an utterly disastrous Republican governor but I doubt she lasts more than one term as the anti-maskers oppose her trying to save their lives. It is terribly frustrating not having a voice, it will cause many more protests in the street. Taxation without representation?

thank you for voting

I'm your neighbor to the south, and am in the same boat. I live in one of two blue counties in TN and share your frustration. Maybe someday our votes will count. Hope y'all can manage to get a new senator. I'd love to see the turtle go down in flames....

-chuckle- I wonder how Republicans in California or maybe Oregon feel...

If you get rid of the electoral college then NY and California will decide every election. So everyone elses vote won't count at all.

That's not true, between NY and CA there's is 59 million people out of 331 million in the US. You have to assume the percentage of the population eligible to vote is about the same in all states. So CA and NY have about 18% of the voters plus no state has all republican or all democrats. Proof that NY and CA would not control the elections

It's 5:20am and I'm getting ready to go stand in line to vote myself. I'm south of you too. I would love to see my states electoral votes split along voting percentages also.

Your vote still counts on another level. The popular vote margin matters psychologically even if it doesn't affect the legal outcome. That's especially true in an election like this, where the Republicans are engaged in all kinds of vote-suppression shenanigans and have their bullshit claims of fraud revved up and ready to go if Trump loses. The bigger the popular-vote margin, the harder it will be for them to negate it by trickery, and the less credible their claims will be. In fact, the more votes Biden gets in red states -- even if he doesn't carry those states -- the more it will affirm that he has a national mandate and not just a blue-state one.

I totally understand the state-vs-state thing, but i also think that's a fundamental flaw in the system. Personally, I believe that people matter more than states. We are a nation of states, yes, but we should be a nation of people.

Well said! I'll be voting later today, joining you in celebrating one of our most important civic duties.

we are a speck of BLUE florida... we voted.

Oregon is part of the interstate electoral vote compact. I, myself, would like it much better if the electoral votes were divided up by % of the popular vote in each state. That would still advantage voters in small vs large states (WY vs CA as the most egregious example), but would be much fairer in all states.

Canada. Not Perfect. We have our problems. But - Canada. Look to your neighbours (yes that's spelled right) for a society where the voters have equal and easy access to the polling stations, we have universal health care ( I have survives 3 different cancers in 5 years - and didn't pay a cent for it), and where a single vote actually counts for electing the leaders of your choice. Canada - so grateful to be born a Canadian.

Every time I hear about "state's rights" I become enraged. States don't have rights. People have rights. Furthermore, if you actually read the Tenth Amendment, it specifically mentions that anything the federal government doesn't already control is left to the states. In other words, the crumbs.

As for my voting, I have not missed even a school board election since my first vote in 1980. Several times by absentee ballot, as I moved around quite a bit in my adult life.

Reading the comments here are way cool. I should add that there are two changes that I'd like to see here in the US:

1. Ranked choice voting. Essentially a run-off with only one trip to the polling station.

The reason the GOP fails in California is because of their policies.

We have redistricting based on population, not politics (independent commission).

We have ranked choice voting.

They have a fair chance at winning, but their policies don't meet approval with the voters.

I can't emphasize enough, local and state elections MATTER if you want change...That's where it all starts.

Sadly, I think that the last (2016) election was the critical election. I remember thinking then that we lost our democracy, and the feeling has only gotten stronger.