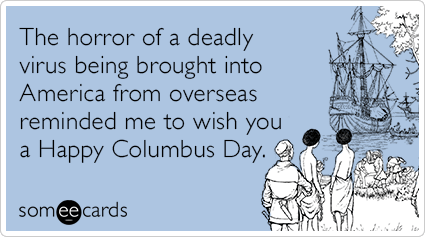 Not so much celebrated these days as commemorated. Columbus sailed for Asia, ended up in the New World, and was credited with "discovering" it, even though there were plenty of people already here. He wasn't even the first European to find it. His ventures managed to unleash deadly diseases into a population that had no immunity to them, and began centuries of conquest, slavery, and exploitation. And now here we are. (via Some eCards)
Posted by Miss Cellania at 10/12/2020 10:00:00 AM