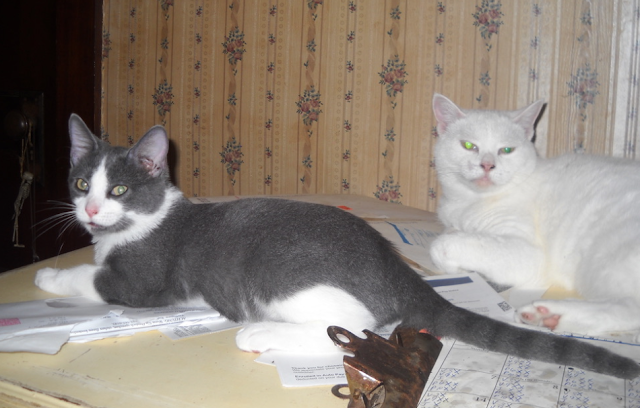 My new kitten Frisby is about six months old now, and she looks like a cat in miniature, with a constantly amazed look in her eyes as she discovers the world. The big difference since the last update is that the other cats have accepted her into the colony. She's busy learning how to be a cat from them, but is still very much attached to me. She's the first cat I've ever had who always comes when called by name!

Tommy, the formerly youngest cat, was the first to accept her. That's been my experience with every new kitten- the youngest takes the new one under his/her wing. He was the first to play with her, and when I first started taking Frisby outside under supervision, Tommy took on the job of teaching her to chase and wrestle and stalk. He also tried to teach her to climb trees, which worried me at first, but she seems to have mastered it now. I eventually let Frisby outside without me, as long as Tommy was with her, because she will stay with him. She's still not allowed outside after dark, because I can't search for her if needed.

Marshmallow went from hate to a deep love for Frisby. Marsh is the only grown cat who drinks milk, and now she will come get me if she thinks Frisby needs a drink, and then stand back and let the kitten drink first. She also lets Frisby eat her gushy food, which the cats only get once a day. If Frisby isn't sleeping in my bed, she's sleeping with Marsh. 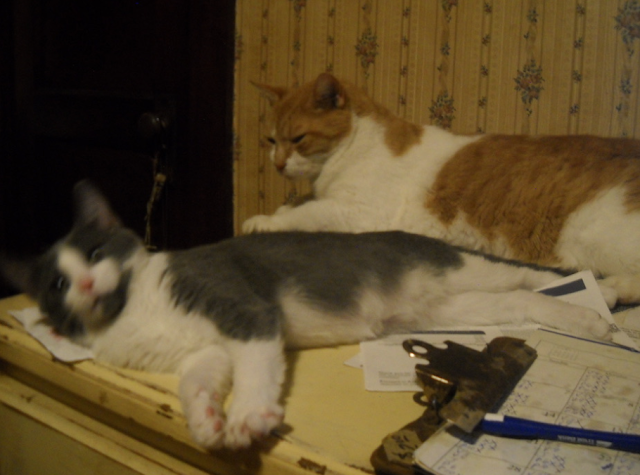 Apollo got over his terror of the kitten, and is now tolerant. He watches over her outside, and lets her play with his tail. But if he catches me watching, he will make a big show of shooing her away. He's a got a tough guy reputation to maintain! Frisby doesn't seem to mind.

It's so cute to see Frisby mimicking the other cats' activities, down to the way they walk. She was desperate to be a part of the colony, and is really happy to hang with the other cats. But Frisby seems to be pretty happy with everything. I've tried to always make it worth her while to obey my minimal rules, so she has no problem staying off the table and coming in when I call. She's truly become a part of the family.

I love hearing about your cats today! Thanks for sharing them!

I'm sitting here reading about your kitten and my one comes in through the open window with a very colourful bird in her mouth.
I now have to go and catch her before she actually kills it.
Yes, gotta love them cats.

Thank you for the cat update. I always enjoy hearing about your family, including your cats.

My wife and I have also recently adopted a couple of new kittens. The first one found us. He showed up about two months ago just as we were going to bed. He was a jumpy little black kitten, barely weened. We named him Cosmo Topper because he kept jumping at unseen things.

A couple of days later we found a kitten in the street with some pretty severe injuries. He started to rally after a couple of weeks care, but died in surgery. We had named him Kerby to go with the Topper theme. Needless to say we were very upset to lose him. Cosmo was visibly missing his companion too.

A couple of days later we found a look alike kitten at the pound. He was christened Kerby II in honor of the his predecessor. The two kittens bound around the house like old buddies. It seems like a great idea to have two kittens to keep each other busy even though our older cats have had no trouble accepting them.

I am surprised about your comment about this being the first cat you have who comes when you call him. All of our present cats, including the kittens, come when called by name. Most of the cats I have owned over the years have answered to their names.

In my experience, all cats know their names, but if they don't want to come inside right now, or don't care to be petted right now, they will ignore me.

A fine clowder you have there, Miss C.