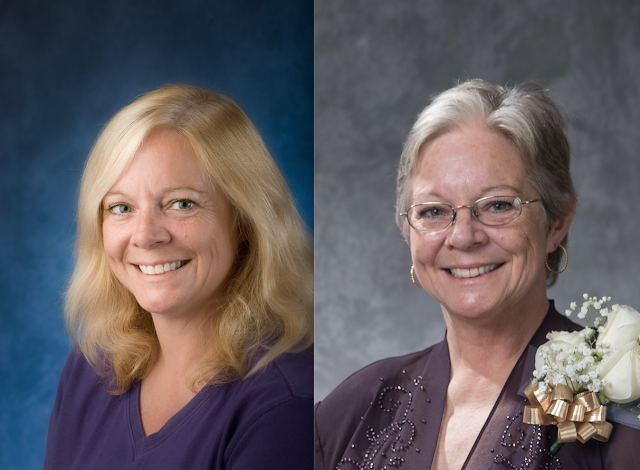 People have been doing the "10-year challenge" on social media to show how they've grown up, or how they've improved with time, or how age has not changed them. I decided to be a little more honest. There's nothing wrong with getting older; it's just a fact of life. As time went by, I felt more and more like the only two pictures I used online, taken in 2004 and 2006, were frauds. I also decided not to use this comparison on social media, because of all the talk about how Facebook and other sites are using the challenge to feed data to their facial recognition software.

There's actually a 12-year difference here, because I do not get a decent picture made often. Both of these were taken by Brother Bill. The first one was taken specifically as a profile pic to use online. The second one was cropped from a group picture, and we did less fussing with it. The bifocals aren't a new addition; I just took them off for the earlier photo shoot. Yeah, I'm still wearing purple.

Still beautiful! Thanks for sharing!

You look great in both before and after! Glad you posted a current photo. Growing older is a good thing and you are doing it gracefully

Just curious ... what was the occasion that called for such a fancy corsage?

That was Princess's wedding last month. I look very "mother of the bride," don't I?

Very nice photos! The comparison with fine wine is appropriate!

You look great in both photos. I love growing older (except for the less-than-random aches and pains). I feel more "myself", rather than trying to fit some image.

I love your blog and check it out several times a day. You almost always have some new tidbit to enjoy.

Thanks for your efforts to entertain and inform your readership. I'm a loyal fan even though I rarely comment.

Except for the hair style, you look the same - still pretty.

Beautiful as always, that inner glow that makes older women so appealing.

First of all, you've aged gracefully. Next, your old
pictures were/are not frauds. Plenty of people with an
online presence intentionally do not use current pictures
in order to maintain some semblance of privacy. More
power to 'em I say. Finally, I think think you nailed it
with the facial recognition software theory. Wired agrees
and San Francisco is trying to ban it.

And it's not just Facebook and not just facial recognition.
I assume you've seen This face swap

Be careful out there!

Enjoy life and remember beauty comes from with in =)

This is about face recognition technology and I'm sad that you of all people fell for it.
Still love your posts but.

You're still amazing! Remembering back when we first started blogging in 2005 and how you supported and mentored me (probably without you even knowing it). Thank you. You have been a positive influence on me.

Still very beautiful- be proud of both pictures! Thank you for giving us a ray of sunshine to look forward to every day...

I've been following you for years and think you still look as great as ever. More importantly you still have a great brain!

I am amazed at how wonderful you look. I like this picture better than the old one. Your eyes say you're more assured of yourself no matter the situation.And your smile is real.