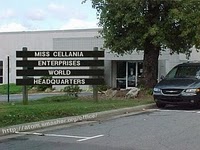 Don't Eat That, John! The Rice Krispie Treat Pizza. He actually ate that.

A Rape on Campus: A Brutal Assault and Struggle for Justice at UVA. (via Metafilter)

The Whiskey Wars That Left Brooklyn in Ruins.

The 7 most mindblowingly stupid arguments against net neutrality.

How The Man Behind Motown’s Sound Conspired To Kill His Family For Money.

The snowstorm in Buffalo trapped people in their homes and on the roads, and seven people have died in western New York state. After more than five feet fell Tuesday, there could be a couple more feet to come today.

Catch up with The Hunger Games movies in 3 minutes. Then you’ll be back in the groove and ready for Mockingjay Part 1 on Friday.

The Walking Fred is a new series that recaps episodes of The Walking Dead. The host is a zombie, who sees things from the dead’s point of view.

Mattel Apologizes for Making Barbie Look Incompetent in Barbie: I Can Be a Computer Engineer. It only took a couple of years and a snarky blog post.