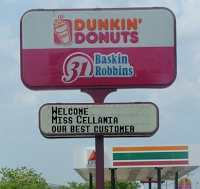 What’s the Matter With Eastern Kentucky?

For the first time, a troop of chimpanzees have been observed participating in a fad, a meme, or actually a fashion statement. The trend is to wear a blade of grass or two sticking out of one ear.  (via reddit)

Kathleen Hale wrote a great piece on finding her power after rape. (via Metafilter)

The Tragic, Heroic Women of World War I. They did their part, and ended up alone because too many men died in the Great War.

This Shredder Can Mulch Entire Trees in Seconds. A forest would only take a day or so to destroy.

Facebook is like a megaphone for stupidity. Here are 39 screenshots to prove it -some text is NSFW.

Ten Things Everyone Should Know About Mel Brooks. His influence on comedy will be felt for generations.

21 Red, White & Blue Desserts To Eat With Pride. Plan now to impress everyone at the Fourth of July picnic.

The curious linguistic history of pineapples and butterflies. It’s about word origins, but the Americans still had to be different.
Posted by Miss Cellania at 6/30/2014 07:00:00 AM

Thanks Miss Cellania - I found a great recipe for the fourth!