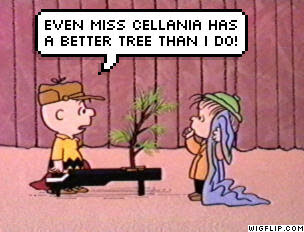 Santa was very upset.  It was Christmas Eve and NOTHING was going right!

Mrs. Claus had burned all the cookies.  The elves were complaining about not getting paid for the overtime they had while making the toys.  The reindeer had been drinking all afternoon and were dead drunk.  To make matters worse, they had taken the sleigh out for a spin earlier in the day and had crashed it into a tree.

Santa was furious.  "I can't believe it!  I've got to deliver millions of presents all over the world in just a few hours and all of my reindeer are drunk, the elves are on strike and I don't even have a Christmas tree!"

He continued,  "And I sent that stupid Little Angel out hours ago to find a tree and he isn't even back yet!  What am I going to do?"

Just then, the Little Angel opened the front door and stepped in from the snowy night, dragging a Christmas tree behind him. He said,  "Yo, fat man!  Where do you want me to stick the tree this year?"

And thus the tradition of angels atop the Christmas tree got its start...