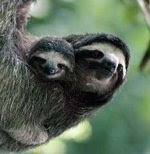 Fun Facts About Sloths. Despite sharing a name with the deadly sin of laziness, sloths aren't all that slow and they don't sleep all day either.

Avatar for Haiti. Please don't sue them, Mr. Cameron. (via the Daily What)

Jerry- The World's Most Human Chimp.

15 Of The Worst Experimental Deaths Of All Time. These stories get progressively more horrifying, so stop reading when you get uncomfortable.

If you're in the market for an airplane, here are a couple of real deals: an Airbus with slight water damage, or some super-high mileage shuttles. Good luck getting bank financing for either.

The Late Night Wars have given us plenty to read about, but this sort of thing has been going on for decades. You probably don't know the story of the biggest network talk show bomb ever. (via Metafilter)

We all know that lemurs only live on the island of Madagascar, but how did they get there in the first place? Maybe they rode out to the island on rafts! No, really!

What's the fastest way to write or take notes? Phil Gyford timed the same passage recorded by handwriting, regular keyboard, iPhone, and other devices. (via Jason Kottke)
Posted by Miss Cellania at 1/25/2010 06:04:00 AM