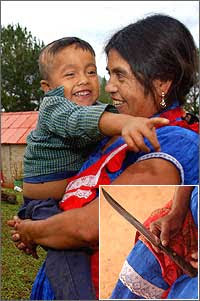 Inés Ramírez Pérez gave herself an emergency Caesarian section on March 5th, 2000. She is the only known woman to survive such an operation and save the baby. Ramírez lived in a tiny remote village in southern Mexico, and her husband was gone when her labor started. From Wikipedia:

...after 12 hours of continual pain and little advancement in labour, Ramírez sat down on a bench, drank from a bottle of rubbing alcohol, and used a kitchen knife to cut open her abdomen. Ramírez cut through her skin in a diagonal line from across her stomach to below her navel (a typical C-section incision is well below the navel). After operating on herself for an hour, she reached inside her uterus and pulled out her baby boy. She then severed the umbilical cord with a pair of scissors and became unconscious. When she regained consciousness, she wrapped clothes around her bleeding abdomen and asked her 6-year-old son, Benito, to run for help. Several hours later, the village health assistant found Perez alert and lying beside her live baby. He sewed her 7-inch incision with an available needle and thread. She was eventually taken to the nearest hospital, where two obstetricians examined her and the baby: they found both alive and well but could not explain why.

Who knows where to download XRumer 5.0 Palladium?
Help, please. All recommend this program to effectively advertise on the Internet, this is the best program!