Today they came for my bicycle. 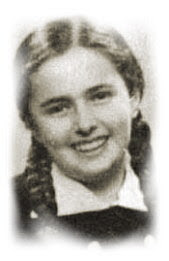 Eva Heyman was a Hungarian Jewish girl who kept a diary during World War II. On this Flickr page, you’ll find an entry about the day they took her bicycle away.

One of the policemen was very annoyed and said: All we need is for a Jewgirl to put on such a comedy when her bicycle is being taken away. No Jewkid is entitled to keep a bicycle anymore. The Jews aren’t entitled to bread, either; they shouldn’t guzzle everything, but leave the food for the soldiers. You can imagine, dear diary, how I felt when they were saying this to my face. I had only heard that sort of thing on the radio, or read it in a German newspaper. Still, it’s different when you read something and when it’s thrown into your face. Especially if it’s when they’re taking my bicycle away. Actually, what does that nasty policeman think? That we stole the bicycle? We bought it from Hoffmann for cash, and Grandpa and all the others worked for this money.