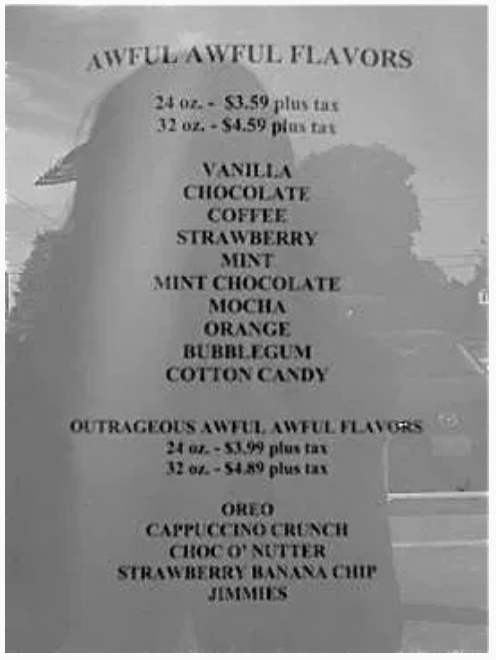 I don't understand the USA way of not including tax, is it because the tax changes daily ?
Same goes for tips, why not include them in the price and pay staff a reliable, decent wage, like in normal countries ?
I'm not anti-American, least I'm not now the Orange has gone, but I am curious.

I don't really know European taxes, but I assume that the VAT tax is by country (or is it universal across the EU?) Anyway, that makes it possible to collect the tax before the products get to the store. And a company can say that its product costs €6, and that's the price you'll see pay the store.

In the US, the sales taxes are local--there can be state, county, city contributions to the tax. A small town of 50 can have a different sales tax than the next town of 50 a mile down the road. So you can't really collect the taxes except at the point of sale--it is too difficult to keep track of all the different taxes otherwise. Also, a company can't tell you the price you'll pay because they have no idea--it all depends on where you buy it.

So all prices are listed without the sales tax and the sales tax is calculated on the spot when you buy the product. I don't know any other way to do it without abandoning the sales tax and going with a VAT, and good luck fighting all the states, counties, and thousands of towns in the US to take away their sales tax.

Oh, and I read that tips, like the words aluminum and soccer, came from Europe--the US adopted it, then Europe dropped it and then started asking "What's up with US and its tips and why do they insist on calling it soccer?"

Lol, don't feel attacked about tips, we are all starting to like you again now the narcissistic monster lives in Florida, and we have always loved your 50s and 60s cars.
No I am as far from Europe as you can get, literally, but we do do a Goods and Service Tax, GST, which is the same as VAT, I guess.
Not sure we gave you aluminum, maybe, but whatever, it is fun to mock, I have a friend here, he was born in New York but has been here for over 50 years, and he still says aluminum, ha, he still says things are inches long, even though we here have been metric since 1976 ... guess he is proud to be American and wants to constantly remind us of the fact !!!
Years ago I used to drive taxis and I'll tell you one of the hardest things was turning down tips offered by people visiting from the USA, big generous tips (maybe because I did a good job of showing them around, telling the best places to go) some of which would equal 10% of my daily turnover ! But I couldn't bring myself to accept them, although I know some cabbies did.
The homogenisation of the planet marches on, we're all becoming the same thanks to TV and movies, but that tipping thing, making someone feel like a lesser person, forcing them to offer maybe false smiles so they can buy bread, yeah, nah, seems far too British class or Indian caste system for me, let a person be paid a fair wage and cut out all the bum licking, lol !

Yeah, maybe I got too defensive about tips. I'm completely against the tipping culture, but you have to tip because the employer--even the tax man!--knows the servers are getting tips and pays (and taxes) accordingly.

If I ran a restaurant, I would make it a 'no tip' restaurant. "We pay are servers fairly so no tipping is expected or accepted!"

Back to taxes again, Newton, that menu above, the restaurant people know what taxes they are paying, federal, county, state, mafia, city or whatever .... they must do or they couldn't charge you, so I guess my question still is why not just include the taxes in the price ?
I did come from some dragon infested, foreign speaking country in Europe originally, moved to the land of the Bunyip for a while, but now I live amongst the Taniwhas, which are more of a water dwelling dragon.
Those countries are on some old maps ... look for the words "Here Be ....."