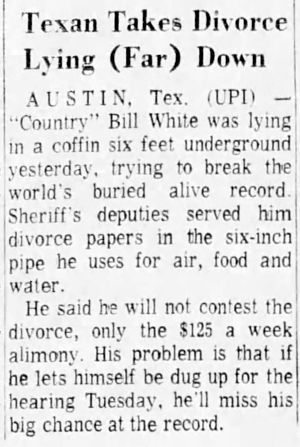 "Country Bill” White was a country music singer and a “living corpse,” a stunt man who was often buried underground for weeks at a time. Those stunts don’t seem that outrageous to us now, because he had a chute to send down supplies and a radio for communication, but he made somewhat of a splash in the 1960s and ‘70s doing it. He even set records, although Guinness no longer keeps records for dangerous stunts. In 1966, he married a woman who was also into being buried alive, so they had something in common. But when they divorced in 1968, she managed to time the proceedings in order to cause him the most pain, as you can see from the above clipping. Read about "Country Bill” White and his strange career underground at Weird Universe.
Posted by Miss Cellania at 10/27/2016 12:12:00 AM