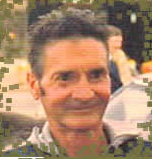 In 1983, at age 61, Australian farmer Cliff Young entered the 875-kilometer endurance race from Sydney to Melbourne, the world’s longest and toughest ultra-marathon.

“See, I grew up on a farm where we couldn’t afford horses or four wheel drives, and the whole time I was growing up– until about four years ago when we finally made some money and got a four wheeler– whenever the storms would roll in, I’d have to go out and round up the sheep. We had 2,000 head, and we have 2,000 acres. Sometimes I would have to run those sheep for two or three days. It took a long time, but I’d catch them. I believe I can run this race; it’s only two more days. Five days. I’ve run sheep for three.”

The athletes left Young in the dust -at the beginning. Over five days, Young overtook every single runner to win the race! His secret? He didn’t realize all the other runners were stopping to sleep each day! Young also didn’t realize there was a $10,000 prize, which he immediately gave away to the other runners. Cliff Young became a national sensation, and now almost all the runners of the annual race run straight through without sleeping. (via Reddit)
Posted by Miss Cellania at 2/13/2021 12:00:00 PM

Wow, he put all those youngsters to shame!

The is the hero we need.