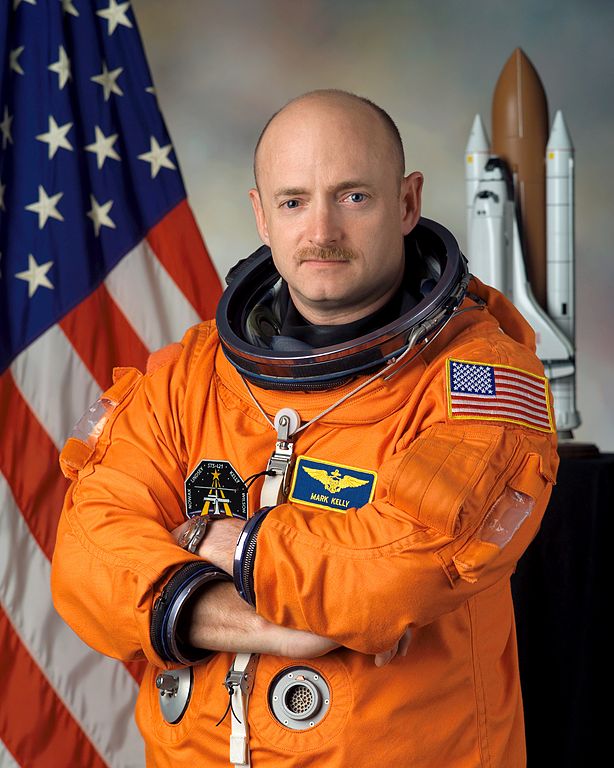 I became aware of astronaut Mark Kelly when Gabrielle Giffords was shot in 2011. Later, I followed the astronaut twin experiment for Neatorama. But it was only today when I saw a blurb at Boing Boing that I looked up his life story. Talk about an overachiever! Kelly's resume is at Wikipedia.

Mark Edward Kelly (born February 21, 1964) is an American politician, former astronaut, engineer, and U.S. Navy captain. He also is an author, political activist, as well as aerospace executive and consultant. Kelly is the husband of former U.S. Representative Gabby Giffords.
A naval aviator, he flew combat missions during the Gulf War. He was selected to become a NASA Space Shuttle pilot in 1996 and flew his first mission in 2001 as pilot of STS-108. He piloted STS-121 in 2006 and commanded STS-124 in 2008 and STS-134 in 2011. STS-134 was his final mission and the final mission of Space Shuttle Endeavour.[3]
His wife was shot in an attempted assassination in Tucson, Arizona, on January 8, 2011, suffering serious injury to her brain. After the shooting, in which six people were killed, both Kelly and Giffords were thrust into the media spotlight.[4] His wife's shooting led to a broad national conversation ranging from the duties of a husband to what is acceptable civil discourse.[5]
Kelly's identical twin, Scott Kelly, is also an astronaut. The Kelly brothers are the only known siblings to have both traveled in space.[6] In 2015, Scott Kelly began a mission spending a year in space on the International Space Station. He returned to Earth on March 1, 2016, after 340 days in space. During and after Scott's year-long mission, the brothers were studied to find physical differences caused by living in space versus a baseline on Earth.[7]
On February 12, 2019, Kelly launched his campaign for the 2020 United States Senate special election in Arizona, running as a Democrat. He is vying for the Senate seat currently held by Republican Martha McSally, a controversial politician[8] and also a combat veteran.[9]

And that's just the introduction. The rest of the entry goes into detail about his education, military service, awards and citations, NASA career, retirement (to care for his wife), books, activism, and political ambitions. It's well worth reading the whole thing.

Reading that, in comparison you cant feel but stupid, lazy and a disgrace to humanity..😉 Does this guy have ten times the time we have ?