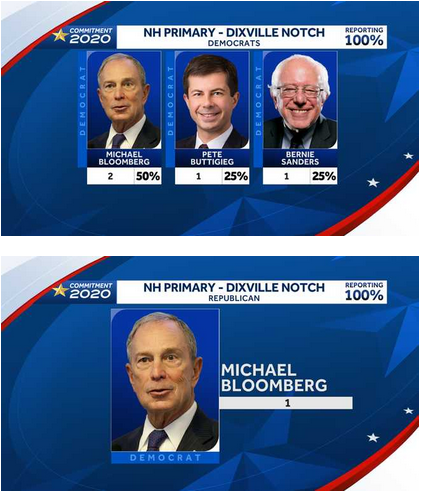 Early returns from New Hampshire: Mike Bloomberg has won the primary vote in Dixville Notch, despite not being on the ballot, in both the Democratic and the Republican primaries! One vote for Bloomberg was the sole vote cast in the Republican primary. His two votes in the Democratic primary beat the one vote each for Buttegieg and Sanders. Dixville Notch has five registered voters, which means they had an 100% turnout.

The results were different in Millsfield and Hart's Location, which were the other two New Hampshire towns doing midnight voting. Klobuchar and Trump won both those towns.
Posted by Miss Cellania at 2/11/2020 08:18:00 AM