Some Offices Should not be Elected Positions

Took a look at the people running for Arizona Mine Inspector and I was not disappointed. pic.twitter.com/DBW19J5xEk
— Jean-Michel Connard (@torriangray) October 24, 2018

What are the consequences of voting a straight ticket in a multi-office election? In most cases, it's completely fine, but there are some offices that really shouldn't be filled by partisan elections. Take the case of coroner. In many places (including mine) it's an elected position. This year in Douglas County, Colorado, the incumbent coroner is Republican candidate Jill Romann, who is a board-certified death investigator with years of experience. She graduated from medical school in 1991 and has a long resume. Her Democratic opponent is 22-year-old Sydney Ludwick, who has a biology degree. To her credit, Ludwick's campaign promise is to enact standards for future coroners, so that no one without a medical degree could ever run again.

That brings us to the Tweet at the top here. These guys are running for the office of Arizona Mine Inspector. The challenger this year for the Mine Inspector office is Democratic nominee Bill Pierce. The comments at Twitter are mostly about how he looks the part. If he showed up and said he was the mine inspector, no one would ask for his ID (such Tweets are already enshrined in Pierce's campaign website). Pierce is an engineer who is MSHA, OSHA, and NRC certified. Sounds like he's got the experience. But he doesn't have the job yet. 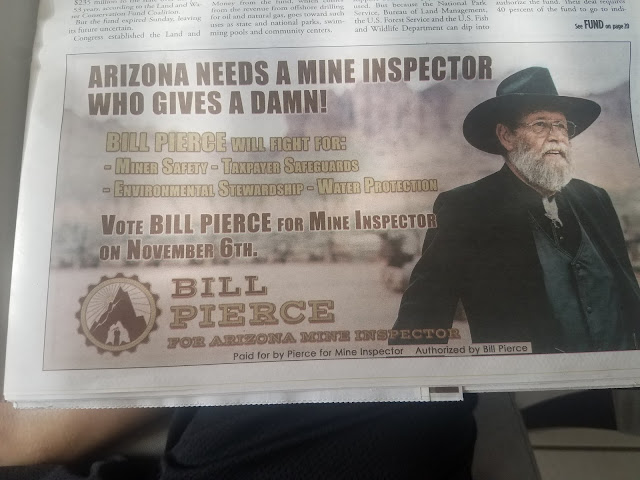 The incumbent is Republican Joe Hart, who's been in office for ten years. He worked for a mining company for 20 years, and was a safety inspector at some point. He also worked in radio, cattle, trucking, and the state legislature. The picture in the Tweet is the mugshot from his arrest last year on a domestic violence charge when he got into a fistfight with his nephew.


Yes, some offices should not be filled by partisan elections. Both coroners and mine inspectors should be appointed by higher authorities, with oversight by the legislature or county commission, and be held to professional standards. Keep that in mind when you vote on November 6.

It's easy to see how both mine inspector and coroner could be accused o0f covering up crimes, especially if they are selected by local elites that have an interest in making and covering up crimes. Having them popularly elected can go a ways toward legitimizing both jobs in the public eye. Not saying it necessarily does make them more honest, but that is clearly the intent.

You've got a point there. The least we could do is set minimum requirements for such jobs. But meanwhile, beware of voting a straight ticket before you check out your local candidates!

why on earth do you elect these positions?

In most places, Coroner has arrest powers. If you have a crooked Sheriff, the coroner is the only person in the county who can arrest them. That is why it is an elected position.

I have a friend who is a County Coroner, he is a Paramedic for his day job. He replaced a 30 year string of Coroners who were morticians.

I asked him about autopsies. He doesn't do them. He hires professionals to do autopsies as needed.

He does do death certificates, which goes well with the paramedic job.

Our sheriff was arrested by the FBI.

Is it just me, or does the tweet picture of Bill Pierce look like a combination of Mark Hamill and David Letterman?