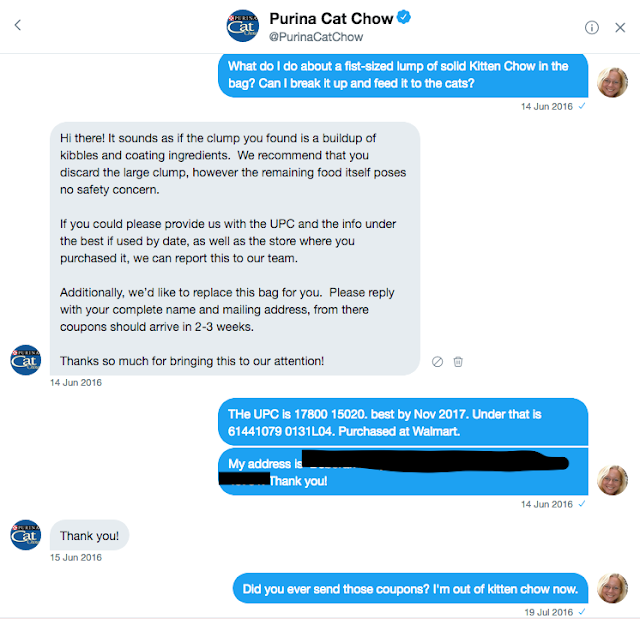 Under my "social media" folder in Gmail, I only save messages from famous people and stuff that is unresolved. I recently noticed an "unresolved" thread of Twitter messages from two years ago. It was the first time I'd ever interacted with a corporation through Twitter. And the last. Notice the dates on the messages. I never received a coupon, so I replied again, exactly two years later. 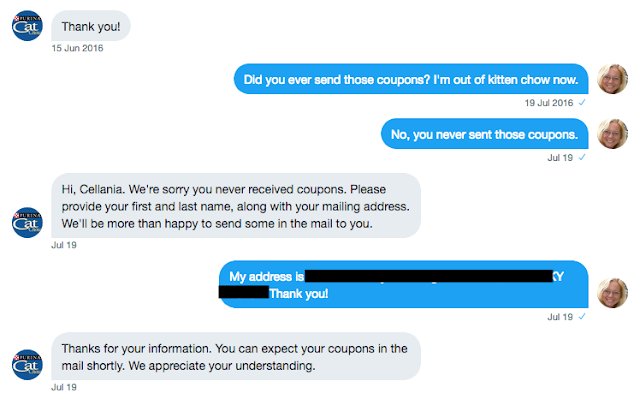 Okay, I might get a free bag of Kitten Chow out of this, or maybe not. Not that I need Kitten Chow anyway, since the cats are all adults. I think I'd originally bought Kitten Chow for Gogo, to get her strength up in her old age. Several days later, I received an envelope from Purina, with three coupons! But they were all for $1 off a bag of any of their dry cat food products. On the back they say, "Limit one coupon per specified item(s) purchased." Great. I'd have to buy three bags of Cat Chow to save any money at all. But I really wouldn't save any money, because I normally buy store brand cat food that's way cheaper. Thanks, Purina.

A good friend of mine of mine and her husband recently put their cat down after a rush visit to the emergency clinic when they realized she hadn’t urinated in over 24 hours. The X-rays showed her kidney and bladder were full of stones, one of which had become lodged in her urethra causing the blockage. She was in an incredible amount of pain and even if they had done surgery, the damage to her kidneys was too far gone. The vet was clear that the culprit was the cheap, dry food she’d been fed all her life. My friends were heartbroken. Cats need a high protein and very low/no carb diet with plenty of water to stay healthy. Less expensive foods bulk out their protein profile with vegetable proteins and bulk up the food in general with carbohydrates, neither of which are can be properly digested by cats leading to all kinds of health problems. Higher quality foods are more expensive but they save on vet bills and heartache in the long run.

They have kibble available all the time, but that's not all they eat. They also get Fancy Feast, fish, one of them drinks milk, and the other two eat mice and moles. They'd really like a duck, but the ducks are bigger than they are.

If you can't use them, donate the coupons to your local shelter. I'm sure they will make good use for them.

So much for Purina replacing that bag of chow. I've had cats in the past and seems like only the males get that problem with stones. Looks like your cats are tougher than that what with eating field mice etc. Keeping it natural. Maybe you could find some miniature ducks for them as a treat? lol